The earliest mention of the Methodist movement in the Baldwinsville area is from Louis Dow Scisco's book of 1895 - "Early History of the Town of Van Buren", Onondaga Co., N.Y. pg 47.  In his book he states:

“Methodism entered into the religious life Van Buren somewhat later than the other denominations, but its extension met with success.  The strength of the Methodist church at the present day is in fact due to the wonderful adaption of its old system to the conditions of the time.  As early as 1811 a Methodist Society was organized in the present town of ElBridge, but not until 1821 was the work of the traveling preachers rewarded in the northern part of the old town of Camillus.  An exhorter named James Baldwin held meetings in that year in one of the old log schoolhouses near Baldwinsville and formed a class which included Samuel and Cynthia Wigent, Abraham and Polly Gillette, Eliza and Miriam Linsday.  These seven held meetings for religious worship and by their efforts succeeded in spreading the Methodist influence to a considerable extent in their neighborhood.  The town of Van Buren was at this time within the territory of the old Marcellus Circuit in the old Genesee Conference.  Manly Tooker and Nathaniel Salisbury are mentioned is early preachers in this Circuit.  The 1828 the Baldwinsville class was transferred to the Lysander Circuit  and about 1838 the class meetings began to be held on the north side of the Seneca River in the town of Lysander, to which community the subsequent history of the class belongs.  It became in time a church, drawing largely its membership from the south side of the river, and is now the Methodist Society of Baldwinsville.  Van Buren people have always constituted an important part of its membership.” 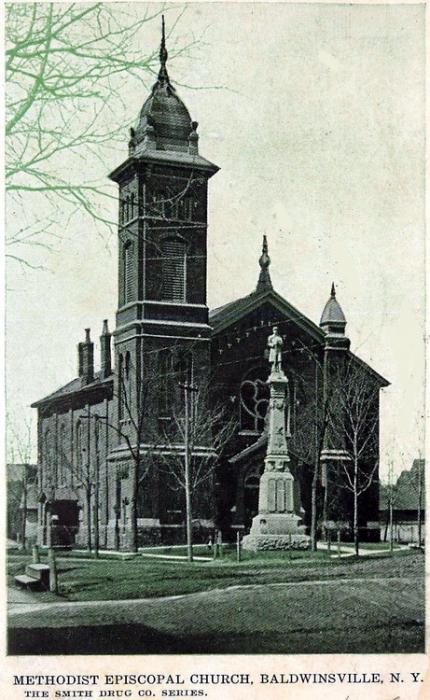 Methodist services were first held at Baldwinsville in 1821 on the south side of the river, by James Baldwin, an exhorter, where he formed a class.  In 1828 Baldwinsville was transferred to the old Cayuga district and Lysander circuit.  In 1829 Baldwinsville and Lysander circuits were transferred to Oneida Conference, while in 1836 Baldwinsville and Lysander appear in the Oswego district of that conference.  In 1838 the Baldwinsville class had twenty-five members, and in the next year meetings were held in the school house on the north side of the river.  In 1840 Baldwinsville was placed in the Clay circuit and in 1843 was made a station, having then forty-five members, but no church property.  On the 29th of August of that year, at a meeting called for the purpose, E. Hickok, A. Dayton, B. Nichols, T. Nichols, and D. Derbyshire were elected trustees of the First Methodist church.  A lot was bought, a wooden church erected and dedicated in December, 1844.  In June, 1869, the society having outgrown the old church, measures were taken to build a new one.  The present building was dedicated October 20, 1870, and cost about $32,000.

In 1830 or 1831 the Rev. Elijah Barnes and Rev. Benjamin Rider were appointed to the Lysander circuit, and through their efforts a class was organized at 'Betts's Corners,' as Lysander was then called.  Previous to 1844 services were held in the school houses or in dwellings, but in that year a wooden church was built; in 1849 a parsonage was purchased.  This church has several times been repaired and enlarged.

The origin of the Methodist church at Little Utica was a class formed in September, 1832, called the 'Palmertown Class,' with George Kellogg leader.  A church was built in 1834, which was repaired and improved in 1857 and in 1875. 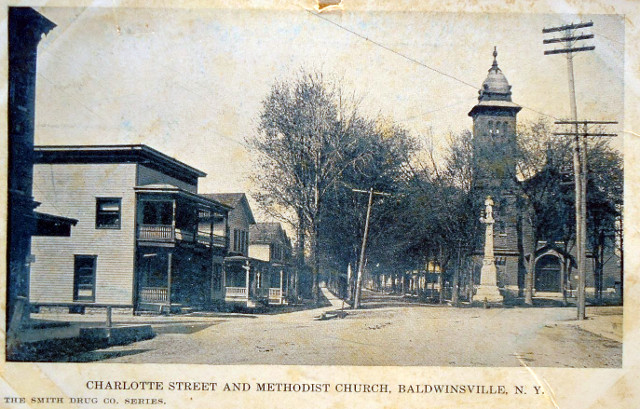 The Church Newsletter, The Visitor, is available online! Download the May 2022 newsletter. Or if you prefer by email, please contact the church office  (635-6442; secretary@bvillefirstumc.org).

Do you have returnable bottles and cans in your home?  Please consider bringing them to the River Mall Bottle & Can Return Center located at 2265 Downer St., B'ville.  All returns benefit the Youth Group.  Thank you!!

The congregation of Baldwinsville First United Methodist Church is committed to providing a safe and secure environment for all children and youth, disabled, and vulnerable adults who participate in ministries and activities sponsored by the church.